Let me show you some of my 4koma (about my life with cats).
Nao-p is my nick name my friend Mami Tachibana gave me. And I call her Mami-p. Of course it comes from Wedding Peach "Momo-p". No one calls me by the name except for her, but I love the 4 koma cartoon "Go Go Momo-pi (Gan-bare Momo-p)"(In the paperbacks) so I use it. :)
Oh, I'm a manga artist Nao Yazawa, and author of Wedding Peach, by the way. :)
These "comic strips" come from my 4-koma blog (in Japanese). You can see all of them in original here. If you have a request which 4koma will be next, tell me. :D
http://yazawanao.blog97.fc2.com/
Other Japanese blog
http://yazawanet.blogspot.jp/

As I posted on FB before, my work Moon and Blood German version is in production right now. Italian version is as well (or pre-production, I'm not informed this kind of information).

The fact is - the translation is not from original (Japanese) but from English! @o@
As I wrote, DMP doesn't tell me the detail of the process, I knew it by the translator's FB post.  She is my friend, I know her in person. Actually, I introduced her to DMP.

Never ever translate from one language into another via a third one ... it NEVER works out right.In my case I'm supposed to translate a text from English to German, the original being in Japanese. So now I was looking through the original script and I'm going all 'wtf did I translate?! That's not even close to the actually meaning!'.Whaaaaaaat?Example:月… (Mond / Moon)月の…王子様 (Mond ... prinz / Moon ... prince)…なんてバカな言葉が頭の中に浮かぶほどに (... was für ein dämlicher Ausdruck, der mir da einfällt / ... what a stupid line to pop into my head)彼は月に似合っていて… (Weil der Mond zu ihm passt / beacuse the moon suits him ...)So the English translation I got was:The moon ...It's as if he were the prince of the moon ...It's so stupid ... how he looks like a prince of the moon ...... there's really no other way I could begin to describe it.WHAT?!That's ... IDEK!!! I can't find words right now ... it's just ... fucking my brain over so badly right now.The German/English in the brackets is a pretty lose translation, but you get my point ...
The frame 2nd & 3rd of the first page and 1st of the second 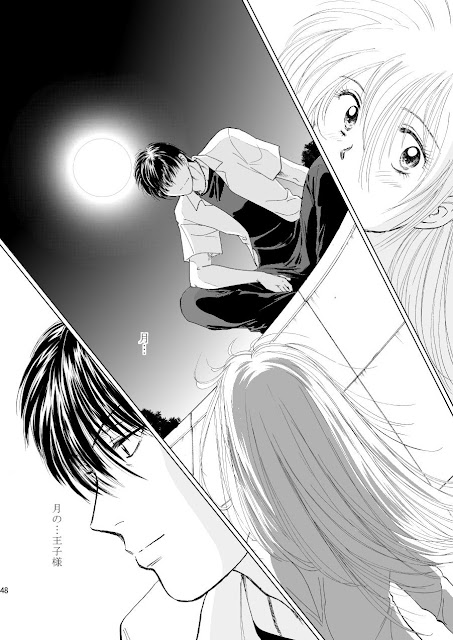 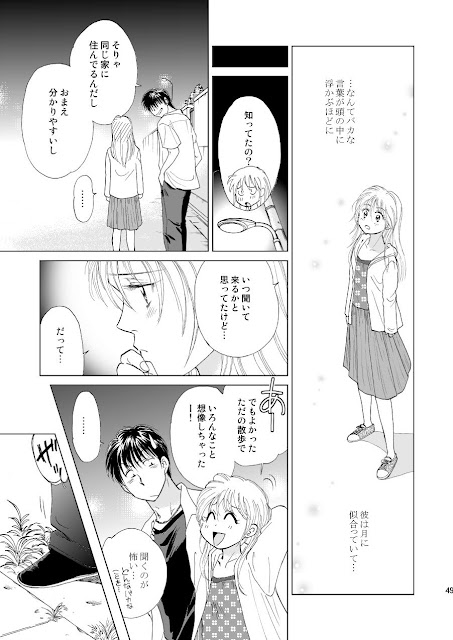 I was so surprised and asked to DMP. The answer was, the right DMP had was only "English" version, so all the translation works would be from English to other language.

When they asked my agreement about German& Italy editions of my works, they didn't mention about this point. They had nothing against me, just they thought it is nothing - not so much important, at least.

This is a - sort of - issue, that they don't think I care about it. This is a moment you sometimes have when you work with non-Japanese publishers. You don't share the sense.

I agree with the translator, my friend E.

During the translation process, some information will be lost. You can't avoid it even if you are one of first rate translator. This one is not journal article but short dialogues with cultural background (high context one). It has many possibility of translation, it can be different by each person , or the culture of the translator.

The result -  German, in this case -  can make a sense, the readers can follow the story, see Five W's and One H (Who, What,  When, Where, Why and How). But the impression might be far from what I meant.

Even if you translate from original, it happens sometimes.  I know it can't be helped when you put one language into another, there are many elements you can't keep. It means if you did it in double, like Japanese - English - Germany, the result is ... (I don't want to think about it).

Still, there is the theory of nothing better -  you have to accept the triple-multiple-acrobat work, maybe.

Anyway, the bright side is, because the German translation is my friend E-chan, German edition will be translated from Japanese edition, at least. She knows Japanese well.
投稿者 Nao Yazawa 時刻: 0:19